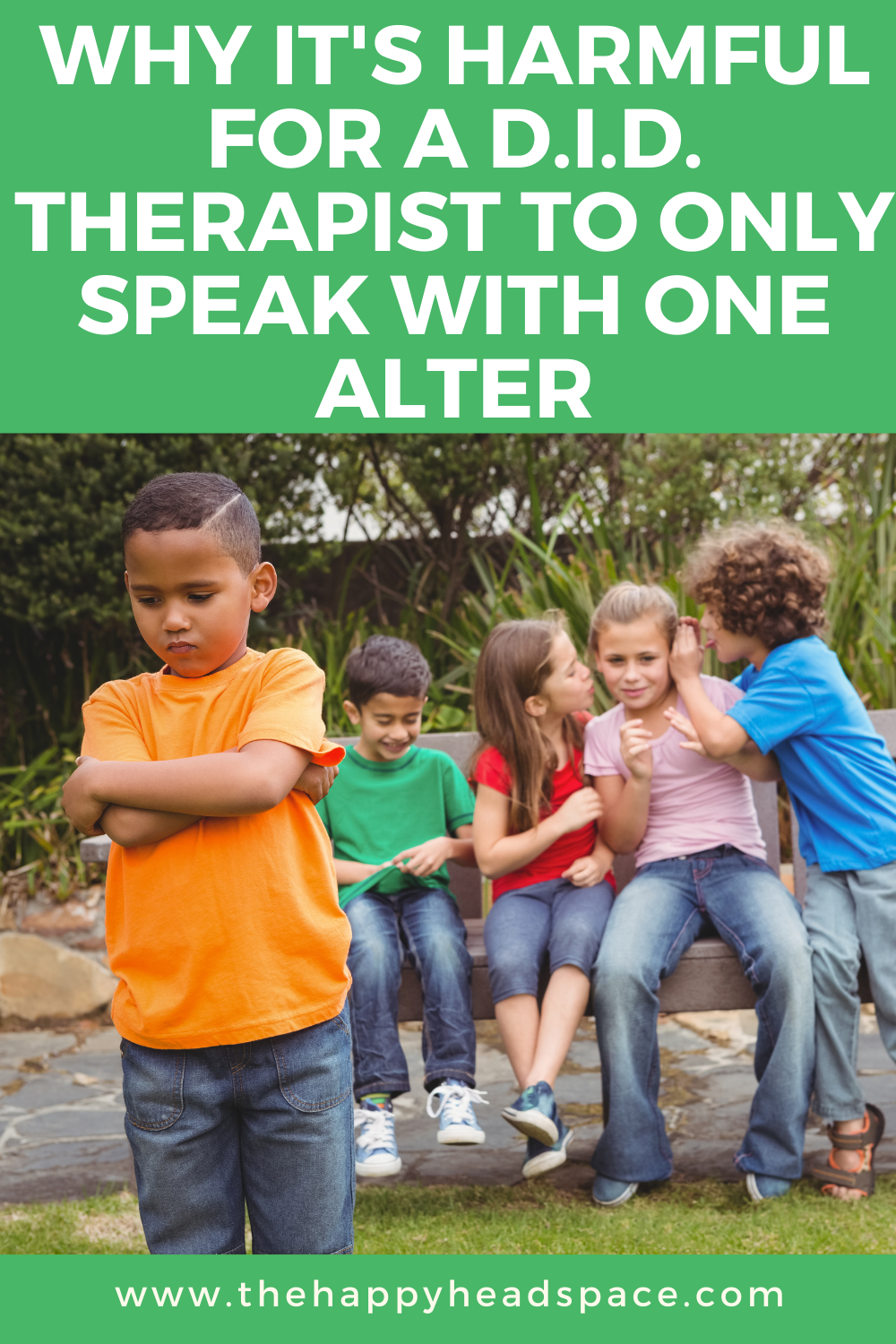 Unfortunately, amongst D.I.D. therapist, there is a tactic that greatly undermines a system’s ability to come together as a loving family. That tactic is when a therapist refuses to speak to any headmate except “the main part”.

While we personally believe that this tactic is unethical, some therapists use it all the same. If your system is considering working with a therapist that practices this, there are some things to be aware of.

Because of the nature of D.I.D., it’s possible that something in this article could be triggering to your system. Please use caution and your best judgement when reading this article. Safety first!

Disclaimer: We are not doctors therapists, or mental health professionals. We’re just a bunch of alters that are speaking from personal experience to help other systems live their best lives.

LEARN MORE ABOUT US

If a therapist won’t speak with other headmates in a system, they will only have access to a fraction of the system’s memory. While the alter they’re speaking with may know many things, they do not know everything. Especially when dissociative walls are raised in times of stress, the therapist will be unable to accurately identity issues.

By not speaking with other parts, the therapist will have a very inaccurate idea of what the overall body has been through. This leads to them making incorrect assumptions and giving unhelpful guidance.

In addition to having an inaccurate view of what is happening in the body’s internal and external life, speaking with only one alter brings up common issues caused by favoritism. By only getting one part’s side of the story, the therapist will be inclined to put more weight into what they are saying.

This is a big problem when it comes to system disagreements. This bias against the other alters is not only unfair, it’s counterproductive. The other alters in the system will quickly grow tired of having their opinions and struggles minimized in favor of the alter speaking with the therapist.

Similar to the issue of favoritism, another issue with this tactic is that it leads to every alter being diminished in comparison to the alter speaking with the therapist.

Any alter that has explained D.I.D. to someone knows that everyone’s knee jerk reaction is to believe that the speaking alter is somehow better or more important than the other alters. Even if you tell someone that you’re one of many alters, there’s still this underlying mistaken belief that if you’re speaking, you must be the “real” person.

This is absolutely not true and yet, therapists can easily fall into this same belief when they only ever speak with one alter. Eventually, the therapist will start to speak about the other alters as if they are “the main part’s parts”. Diminishing a majority of the headspace in this way is a recipe for disaster.

No one likes to be ignored, diminished, or put down and alters are no different. When an alter is treated this way, there will be issues. One issue is that they will act out. An ignored alter is far more likely to have issues with food, sleep, working, and self harm. They’ll feel forced to get attention in the only ways they know how.

Lowering an alter’s self esteem by refusing to speak with them will also cause some alters to question their purpose and value in life. An individual that believes life would be better off without them often turns to dark thoughts. This can get dangerous quick; especially if a system has already shown signs of struggling with suicidal ideation and self harm.

When not given equal respect, alters will likely turn to inward fighting. This may be due to the emotional stress caused by the situation or as an attempt to improve their situation. Either way, disrespecting alters by refusing to speak with them causes far more harm than good.

Now that your system knows why it’s important that every alter be allowed in therapy, what can your system do to make sure you’ve found a good therapist? Check out this article to learn traits of a good Dissociative Identity Disorder therapist. This post will help your system to spot a great therapist for you!